This stone plaque called ‘Tyburn Tree’ will be found on the large traffic island on Edgeware Road near Marble Arch in London and is one of many historical reminders of London’s dark history which often goes unnoticed. Though called the ‘Tyburn Tree’ there was no tree at this location and refers to the name given to a wooden scaffold used for public executions which could accommodate three prisoners at a time. From 1196, the first recorded execution, to 1783 this part of London was open countryside and hangings were considered popular entertainment. For instance, when highwayman Jack Sheppard was executed, there is said to have been an excited crowd of around 200,000.
Two expressions used during this period continue to be in popular use: “one for the road”, originally meant the last pint of ale before the condemned was transported by cart to Tyburn with excited crowds following them, also associated with alcohol is the expression ‘hangover’. Public hangings were abolished in 1868.

Belgium fighter pilot Eugene Seghers RAF (VR). His memorial plaque in Walden Uckfield, East Sussex states: “Flight Lieutenant Seghers took off in his Spitfire from RAF Deanland to intercept V1’s (Anti-driver patrol) South of Uckfield. He failed to destroy a Doodlebug after intense cannon fire, its engine cut out, meaning that its terrible descent towards the town was imminent. Flight Lieutenant Seghers courageously attempted to deflect the high explosive flying bomb away from Uckfield using his aircraft’s wing. Near this location at 14:22 he made contact with the bomb causing it to detonate, destroying the Spitfire and killing the brave airman instantly. Sub Alis Gloria” (Under Wings of Glory) 26 July 1944.

A colourised black and white image by Royston Colour of British soldiers in Dover after being evacuated. Image dated June 1940.

Part of the Shuttleworth Collection. The Lysander with distinctive extra fuel tank bolted between its undercarriages to allow the aircraft to fly deep into occupied France and return to RAF Tangmere during ‘pickup’ operations (delivering and extracting SOE, MI9, SIS, RF agents). Also distinguishable by the matt black fuselage and underside of wings to allow the aircraft to blend in with the moonlit sky and tops of wings camouflage to blend in with the ground when night fighters approached from above.

SOE operations in Yugoslavia supported Tito’s Communist Partisans at the expense of the royalist Chetniks. On 5 February 1943 a team of four SOE operatives (Operation Disclaimer) were handed to the Germans by local people shortly after they landed and the next team which arrived several days later were denounced and it was difficult to discover who could be trusted or their political loyalties.

Selby had served with 11 Commando before joining SOE and arrived in Yugoslavia with another SOE agent, twenty-six-year-old John Rochester who was of Yugoslav extraction whose family name was Yovanovic.

Dressed as peasants they attempted to contact the partisans but were captured by pro-German forces and handed to the German authorities. There is much contradictory evidence surrounding the fate of Selby and Rochester. It cannot be confirmed Selby was shot whilst attempting to escape and there is no reliable information concerning the fate of Rochester and both were originally listed missing presumed dead.

28-year-old Edward Coppin who was known as ‘Ted’, served with the DONKEYMAN circuit and was responsible for organising resistance in the port of Marseille and over time built up a successful sabotage team consisting of railway workers. Apart from derailing trains, in 1942 he was responsible for diverting trains destined for Germany by switching the points and sending them to the Spanish border.

Coppin was arrested at his safehouse on 23 April 1943 but because he used several cover names there continues to be much confusion regarding his fate and a post-war investigation into missing agents failed to identify what happened to Coppin after his arrest.

It is believed Coppin was tortured for information but refused to talk which is evident by the fact no members of his group were arrested but there is scant evidence to support the claim he was executed at Ravensbrûck concentration camp in September 1943, consequently, the fate of ‘Ted’ Coppin is unknown, and Coppin has no known grave. 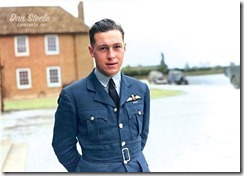 22-year-old Canadian fighter pilot Flying Officer William ‘Willie’ McKnight DFC &Bar fought during the Battle of France and the Battle of Britain and served as the wingman for Douglas Bader. On 12 January 1941 he was shot down over the English Channel whilst serving with No.242 Squadron and has no known grave. (Colour from original IWM B&W image by Dan Steel)

Adolphe Rabinovitch was a Russian-Egyptian Jew who served with the French Foreign Legion during the Battle of France. After being captured he escaped and made his way to England where he was recruited by SOE. On his second mission to France he was captured, interrogated and sent to Gross-Rosa concentration camp where he was executed sometime in 1944 at the age of 25. 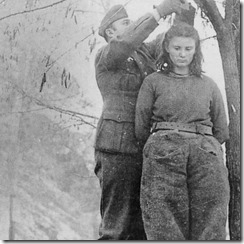 Radic was born to a Bosnian Serb family on 29 December 1925. In February 1943 she was captured during a firefight against the 7th SS Volunteer Mountain Division Prince Eugen and was tortured for several days but refused to provide the names of other partisans and was sentence to death by hanging.

After the noose was placed around her neck a German officer said he would spare her life for the names of members of her group and Radic loudly replied “I am not a traitor to my people. Those whom you are asking about will reveal themselves when they have succeeded in wiping out all the evildoers to the last man.” Lepa Radic was 17 years old when she was publicly executed on 11 February 1943.