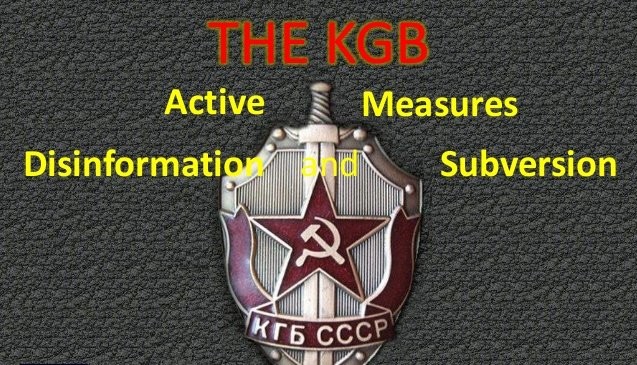 This brief introduction argues that what is commonly referred to as Russian Hybrid Warfare is little more than a remodeled and modern version of KGB active measures: the old ‘tool box’ of the Soviet period has been replaced with modern tools to fit 21st century technology along with the socioeconomic and political climate which differs greatly from the Cold War period.

Although many of the tools have been either replaced or improved, their intended outcomes remain the same.

Active Measures were the responsibility of Service A of the KGB First Directorate which worked closely with the International Department (ID) and all Soviet agencies abroad were available to support or participate in Active Measures.

Apart from propaganda and disinformation, active measures included political influence operations, the use of religious organisations and the Anti-Zionist Committee. These clandestine operations were designed to further Soviet foreign policies and to increase the international influence of the Soviet Union.

Throughout the 1960’s, among the ‘tools’ used by the KGB was disinformation: including the ‘leaking’ of false documents and information to the world’s press in an attempt to deceive the public or political elite in the target country and/or to undermine that country’s credibility and trust among the international community.

Active measures also included supporting terrorist organisation along with those states sponsoring such activities; instigating and coordinating social protest, disorder and politically inspired violence. For a recent example of these elements of active measures and their effectiveness one only has to look at how these played out in Ukraine- promoting civil unrest to undermine the government and overwhelm security forces whilst also providing opportunities for propaganda and disinformation; supporting and encouraging acts of terrorism by ‘separatists’ whilst masking Russian involvement through the covert use of Spetsnaz forces, the FSB and the GRU.

In the following examples the primary object of the KGB’s use of disinformation, as part of their wider active measure initiatives, was to disrupt and to create suspicions about the United States. It is interesting to note that Russia is currently running a similar campaign against NATO member states.

Media Landscape during the Soviet period

In October 1985 a global campaign was launched to convince the world that the AIDS virus had been manufacture in the United States as part of a genetic engineering experiment. For several weeks this ‘disinformation’ was regarded as a reputable story by the world’s media and for several months after the story was finally called into question and dropped by the mainstream media, lesser known and less reputable news producers in Africa, Asia, the middle east and, of course, within the Soviet Union and regions under Soviet influence, continued to run the original story for a further eighteen months or longer.

The above is a good example of using the world’s press as an effective means by which to spread disinformation.  This campaign also shows that even when a story is proved false, refutation rarely offsets the damage done by the original story. During another disinformation campaign in 1998, a forged US National Security Council (NSC) memorandum alleged the United States foreign policy strategy was based on a ‘first strike’ nuclear capability.

Although Putin’s Russia still use KGB Active Measures to plant stories in the Western Media – paying Journalists to place stories; using lesser known media platforms which are known for not checking sources; the use of forged ‘official’ documents and using radio and television to disseminate the Kremlin message, the power of the internet is now fully exploited. Working in conjunction with the Kremlin controlled press, social media and seemingly independent websites supported by an army of Russian trolls, have made the dissemination of Russia initiatives for systematic and intentional deception not only easier but also allows the creation of artificial credibility.  It is often now more difficult to identify the original source which inevitably is a Russian asset or agency.

The so-called ‘Silent Forgery’: an unpublished fabrication aimed at a specific foreign government, group or individual is still a powerful tool and may be passed off as originating from a well-meaning whistle blower via the internet.

Russian propaganda, like most propaganda, promote specific ideas. Activated ideology, for instance, consisting of hate, dislike and contempt is often used by the Russian media.  Likewise, integration propaganda- messages designed to unify, integrate, and harmonize society will also be found linked to Russian nationalism and promoting a stand against the United States and the NATO alliance.

Frank Hoffman (A Closer Look at Russia’s Hybrid War, Wilson Center, no.7, April 2015) described Hybrid Warfare as, “tailored conventional weapons, irregular tactics, terrorism, criminal behaviour in the same time and battle-space.” He also points out that this form of warfare “simply denotes a combination of previously defined types of warfare, whether conventional, irregular, political or information. “

The concept and merits of Hybrid Warfare is attributed to the much quoted Russian Chief of Staff Valery Gerasimov, who outlines what he called non-linear warfare using a mix of military and non-military means. We have also seen the formation of new Spetsnaz units, along with independent airborne brigades and marines being incorporated within specialized brigades often working in cooperation with the FSB or GRU, and their new roles being Spetsnaz operations which are essential for the covert element of hybrid warfare. As we saw in Ukraine and continue to see in other regions of Russian interest, old style KGB Active Measures such as subversion, political influence operations, information warfare and terrorism are all employed within Russia’s Hybrid Warfare strategy.

Consequently, based on the Russian invasion and occupation of Ukraine and various hostile acts in other regions, including aggressive intelligence operations and information warfare to increase their global influence, Active Measures and Hybrid Warfare are inseparable – all elements may be used together, separately or tailored to fit various objectives and may be culturally, religious or politically specific for optimum effect.