‘Teddy’ Sheean was a farm labourer before he joined the Royal Australian Navy Reserve on 21 April 1941 as an Ordinary Seaman and four of his brothers were already serving in the Australian Army and another was in the navy.

After completing training, he was eventually posted as an anti-aircraft gun loader on HMAS Armidale which was on escort duties on the eastern coast of Australia and New Guinea before returning to the safety of Darwin in October.

On 29 November HMAS Armidale along with HMAS Castlemain sailed to the Japanese-occupied Island of Timor to extract Australian soldiers of 2/2nd Commando Independent Company and land fresh troops to continue operations. Both ships then rendezvoused with HMS Kuru which had already taken the troops off the island and were then transferred to Castlemain.

At 12:28hrs on 1 December Armidale and Kuru came under heavy and repeated attacks from Japanese aircraft and the two ships became separated. By 14:00hrs Armidale was being attacked by at least thirteen aircraft and just over an hour later a torpedo hit the port side of the Corvette, another hit the engineering section and was quickly followed by a bomb striking the aft section.

As Armidale listed heavily to port and was close to sinking the order was given to abandon ship and as the survivors jumped into the sea the defenceless men were machine-gunned by Japanese aircraft. Instead of boarding a life boat 18-year-old Sheean ran to his gun as the ship was sinking and though already wounded in the chest and back he shot down one Japanese bomber, continued firing at other aircraft to keep them away from the men in the water and was seen still engaging the enemy as the ship disappeared under the sea.

Only 49 of the 149 members of HMAS Armidale survived and Sheean was mentioned in dispatches. In 1999 a Collins Class Submarine (HMAS Sheean) was named after him and is the only ship in the Australian navy to be named after an Ordinary Seaman. 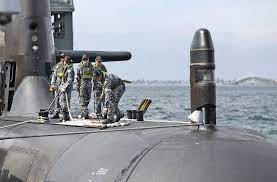 In 2020 following a public campaign a panel of experts examined eye witness accounts of his action and recommended the Australian Government posthumously award Ordinary Seaman Edward ‘Teddy’ Sheean the VC, and on 1 December 2020 members of his family received his Victoria Cross during a ceremony in Canberra. 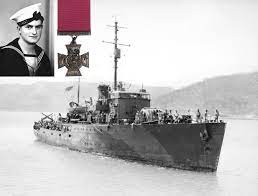