Whilst serving with the Royal Berkshire Regiment John Austin volunteered to join the Jedburgh Teams (Jed’s) which were formed to operate in various occupied countries to assist local resistance supporting the allied strategy for D-day and after completing training was promoted to sergeant.

On the night of 11 September 1944 John Austin with Major Brinkgreve of the Dutch Army and Major Olmsted of the US army, referred to as Team DUDLEY, parachuted from a Short Sterling bomber into a remote region of the Netherlands and after leaving the aircraft two containers of weapons were dropped by parachute which they buried not far from where they landed.

Apart from arming members of the Dutch Resistance operating in Overijessal, a province in the eastern part of the Netherlands, they were also ordered to encourage the Resistance to defend bridges which the allies needed during their advance into Germany. 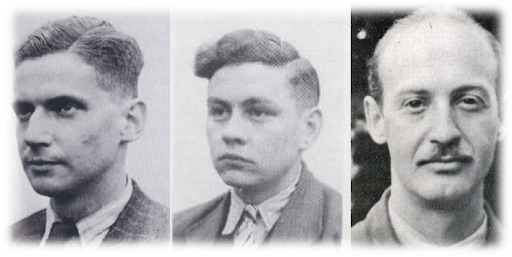 Jedburgh teams were not undercover agents and wore uniforms and though this was appropriate for Jed’s working in France and other occupied countries it was impractical in a small country like the Netherlands where they had to move around the country, so they quickly acquired civilian clothes and after meeting members of the Resistance the following message Austin sent to London was far from encouraging:

“The local self-appointed Resistance leader had a very imperfect group under his command. They had no knowledge about German troops in the area or any German supplies or depots in the area.”

During Operation Market Garden on 17 September 1944 when allied paratroopers attempted to seize bridges over the Rhine, intense fighting in the city of Arnhem and the surrounding area resulted in large numbers of German troops looking for members of the Resistance and people assisting allied paratroopers.

Whilst the three Jed’s and a members of the Resistance were travelling by car they came across a checkpoint manned by the Wafer SS, because they had no documents and were armed they decided to crash through the road block whilst firing at the soldiers with their Sten guns and during the brief but intensive engagement five members of the SS were killed or wounded. Later that day a car of the same make and model approached the same checkpoint and the SS immediately opened fire with machine guns and threw two grenades at the approaching vehicle, and whilst examining the wrecked car discovered they had killed an SS officer, a Gestapo (SD) officer and their driver.

Over the next few days Team Dudley with members of the Resistance were involved in several sabotage operations and ambushing German troops and by 1 October the team had organised all the resistance groups in the area which numbered around 3500 men and women. Austin also informed London they had a further 12 to 15,000 who could be mobilised to support the allied advance.

It is thought to have been late November when Austin, Brinkgreve, Olmsted along with around 116 other escapers including members of the British 1st Airborne Division which was trapped behind enemy lines attempted to cross the Rhine but only seven succeeded and the remainder were either killed or captured and one of those captured was John Austin.

John Austin was sent to Zwolle Prison in north-eastern Netherlands and on 4 April Austin and five Dutch prisoners were taken from their cells and shot in retaliation following an attack on a senior German officer. At the time of his death Austin was 21 and his name is on the Memorial at Hattem, Netherlands.