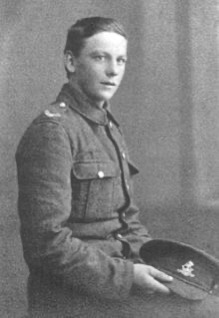 Arnold Loosemore enlisted into the army on 2 January 1915 at the age of 18 and after completing training was posted as a private soldier to the York and Lancaster Regiment and served during the Gallipoli Campaign.

After returning to England he underwent training as a Lewis Machine Gunner and in July 1916 was posted to the 8th Battalion Duke of Wellington’s (West Riding) Regiment and at the age of 21 his battalion was posted to the Somme in France.

On 11 August 1917 his platoon came under intense rifle and machine gun fire from German trenches and were pinned down when Private Loosemore decided to attack the enemy trench alone. After crawling towards enemy barbed wire under fire he found a section which was partly cut and after crawling through with his Lewis gun he continued crawling to higher ground before engaging a German trench and killing around twenty enemy soldiers.

After his Lewis Gun jammed three German soldiers rushed his position which he killed at close range with his revolver before clearing his jammed gun and continuing his lone firefight. Later that day he also killed several German snipers and carried an injured British soldier to safety. For his bravery he was promoted to Corporal then to Sergeant and was awarded the VC.

At Zillebeke in Belgium, on 19 June 1918 his officer was seriously wounded, and his platoon became widely scattered during an enemy bombardment. Whilst disregarding his own safety under machine gun fire Sergeant Loosemore organised his platoon and brought them back along with the wounded to the British lines. It was later recognised it was his leadership which resulted in his platoon later capturing the enemy position and was awarded the DCM (Distinguihed Conduct Medal).

On 13 October 1918 Sergeant Arnold Loosemore DCM, VC was shot in the leg by machine gun fire near Villiers-en-Cauchies, France and his leg had to be amputated above the knee after which he returned to England and was discharged from the army. Due to various health problems associated with his war injury he was unable to find work and died from tuberculosis on 10 April 1924.

His wife Mary who had a young son also called Arnold was refused a War Pension from the government because her husband died after the war and found herself destitute. With no money to pay for a funeral Mary was forced to bury her husband in an existing grave with three other bodies whose families could not pay the funeral costs at All Saints Churchyard, Ecclesall, Sheffield.