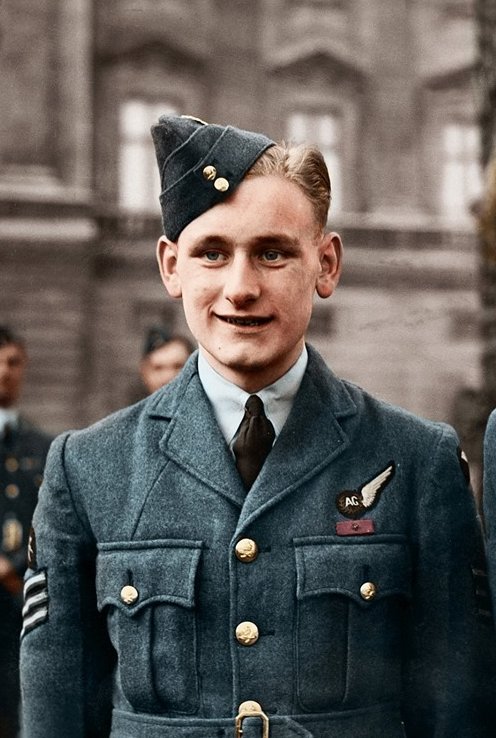 After being trained as a wireless operator and air gunner in 1940 he was promoted to sergeant and assigned to 83 Squadron which flew Handley Page Hampden bombers.

At the age of 18 John Hannah become the youngest recipient of the Victoria Cross for aerial operations during the Second World War.

The King has been graciously pleased to confer the Victoria Cross on the undermentioned officer in recognition of most conspicuous bravery.

On the night of 15th September 1940, Sergeant Hannah was the wireless operator/air gunner in an aircraft engaged in a successful attack on an enemy barge concentration at Antwerp. It was subjected to intense anti-aircraft fire and received a direct hit from a projectile of an explosive and incendiary nature which burst inside the bomb compartment.

A fire started which quickly enveloped the wireless operators and rear gunners’ cockpit, and as both the port and starboard petrol tanks had been pierced there was grave risk of the fire spreading.

Sergeant Hannah forced his way through to obtain two fire extinguishers and discovered that the rear gunner had had to leave the aircraft. He could have acted likewise through the bottom escape hatch or forward through the navigator’s hatch but remained and fought the fire for ten minutes with the extinguishers and beating the flames with his logbook when these were empty.

During this time thousands of rounds of ammunition exploded in all directions and was almost blinded by the intense heat and flames but had the presence of mind to obtain relief by turning on the oxygen supply. Air admitted through the large holes caused by the projectile made the bomb compartment an inferno and all the aluminium sheet metal on the floor of the airman’s cockpit was melted away leaving only the cross bearers.

Working under these conditions which caused burns to his face and eyes Sergeant Hannah succeeded in extinguishing the fire. He then crawled forward and ascertained the navigator had left the aircraft and passed the latter’s log and maps to the pilot. This airman displayed courage, coolness and devotion to duty of the highest order and by his action in remaining and successfully extinguishing the fire under conditions of the greatest danger and difficulty enabled the pilot to bring the aircraft to its base.

In late 1941  due to weak health as a result of the severe burns he had sustained John Hannah was discharged from the RAF with a full disability pension, but his health continued to deteriorate.

After being unable to find a job to support his wife and three young children he became a taxi driver after his aunt borrowed him her car but due to increasing ill health, he returned the car in 1943 and could no longer work. John Hannah died on 7 June 1947, aged 27, at Markfield Sanatorium in Leicester where he had been a patient for four months.