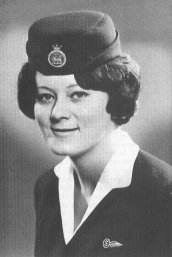 Barbara Harrison wanted to travel the world and was excited after successfully completing her training as a flight attendant for the British Overseas Airways Corporation (now part of British Airways).

On 8 April 1968, 22-year-old Barbara Harrison was a flight attendant on a BOAC Boeing 707 which took off from London Heathrow Airport at 16.27 bound for Sydney Australia and the citation for her GC describes what happened immediately after take-off.

CENTRAL CHANCERY OF THE ORDERS OF KNIGHTHOOD

THE QUEEN HAS BEEN GRACIOUSLY PLEASED TO MAKE THE UNDERMENTIONED AWARD

No. 2 engine of B.O.A.C. Boeing 707 G-ARWE caught fire and subsequently fell from the aircraft, leaving a fierce fire burning at No. 2 engine position. About two and a half minutes later the aircraft made an emergency landing at the airport and the fire on the port wing intensified.

Miss Harrison was one of the stewardesses in this aircraft and the duties assigned to her in an emergency were to help the steward at the aft station to open the appropriate rear door and inflate the escape chute and then to assist the passengers at the rear of the aircraft to leave in an orderly manner. When the aircraft landed, Miss Harrison and the steward concerned opened the rear galley door and inflated the chute, which unfortunately became twisted on the way down so that the steward had to climb down it to straighten it before it could be used. Once out of the aircraft he was unable to return; hence Miss Harrison was left alone to the task of shepherding passengers to the rear door and helping them out of the aircraft. She encouraged some passengers to jump from the machine and pushed out others. With flames and explosions all around her, making an escape from the tail of the machine impossible, she directed her passengers to another exit while she remained at her post. She was finally overcome while trying to save an elderly cripple who was seated in one of the last rows and whose body was found close to that of the stewardess. Miss Harrison was a very brave young lady who gave her life in her utter devotion to duty.

According to witnesses, after the escape chute had been burnt away Harrison continued to force passengers to safety by pushing them out the door and continued to do this  even as flames and smoke were licking {sic} around her face.  She then seemed to be preparing to jump but instead turned back to help the remaining passengers. There was another explosion and she was not seen again. Her body was found with four others near the rear door; all had died from asphyxia.

Her George Cross was presented to her father and was eventually sold at auction and purchased by British Airways.  It is now on display at the British Airways’ Speedbird Centre in Harmondsworth, Middlesex.